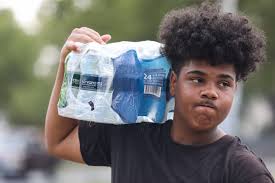 Many of the young boys, famously known as the Atlanta Waterboyz, come from communities struggling with poverty, crime, drugs, gang wars, violence, poor educational outcomes and housing.
Boys from all across the City of Atlanta including Historic Vine City, Mozley Park, Cascade and even University Ave. (where Rayshard Brooks was killed by a police officer) are selling waters.
There are boys as young as 7 and 8 years old out on the streets with their siblings who are not much older than them at 12 and 13 selling bottled water and Gatorade as their hustle. They are carrying coolers and waters on bikes and on buses across town to make ends meet. But Black youth in America have been struggling and suffering far too long only to be criminalized for doing so.
We cannot continue to play into a narrative of criminalizing Black boys when they are simply trying to survive.

Atlanta does have a Mayor named Keisha but what does this mean when many Black families are working poor and in impoverished? Even with Black leaders in high places as well as a black female city council president it seems as if it's the world against these Black boys. This still doesn’t change the fact that Black people in Atlanta are still struggling and suffering in the city too busy to hate.

Recently, Atlanta City Council leaders have posted mix messaging around the Atlanta Waterboyz selling water. One member made a statement that she’s afraid of them coming up to her car and other resident cars. Another stated that we should be doing more for our children and getting the resources to community leaders. All while one leader promotes a narrative of support around the youth being permanently removed and detained by police if they continue to be on the streets. Leadership has ignored implementing solutions adding fuel to the ongoing fire causing the boys to turn to the streets.

Complaints about the youth having to sell water on the streets due is to poor workforce development and opportunities for Black citizens in particular zip codes to make living wages. This is an inherited problem that didn't start in 2020. The issue didn't ramp up in the media until other youth in the city saw the social media hype and went into areas such as Buckhead to make even more money selling waters.

I was a youth in Atlanta who grew up selling waters, Capri-Suns and chips in the 90's.

The stories we see in the media are one sided. There’s two sides to every coin and story. Although the situations are between the youth and drivers can be avoidable these aren't the actions of all the youth. The city's decisions around providing support and resources is lackluster. Giving the task to PAL and not providing the funding to them to train youth, collaborate with community leaders and provide better outcomes is a scapegoat. It's almost as if city and business leaders predetermined that they'd eliminate resources for these youth to succeed and have them suffer in the prison system or in continued poverty.

Last year, the city returned $1.3 million dollars for workforce development. Our Atlanta council members and city leadership should be held accountable for this especially since the youth in Atlanta have been selling waters for close to a decade.

We realize and understand that the boys need better training on how to be entrepreneurs. The concerns about the number of youth approaching cars, dodging in and out of traffic and the hostility over the money being given have been addressed, acknowledged and being improved. This is why community leaders in Atlanta such as Kacey Venning, Marc Boyd, Asante Hill and others take the time to help the youth. 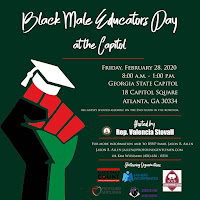